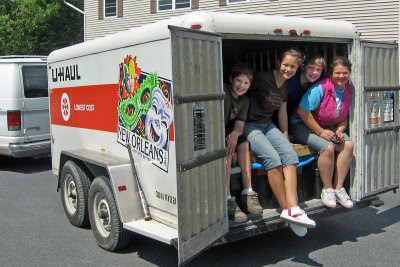 One of the kids broke out in laughter as we were driving our stuff to Mountainside Bible Chapel to be stored for 1 year. They just realized that "Uhaul" meant that it was you that would haul it, not someone else. Deanne and I began to laugh as we realized that 18 years ago we drove away from Schroon Lake in the smallest Uhaul truck as we began our ministry in New Jersey. Now, 18 year and 4 kids later, we were returning our goods to Schroon Lake in a trailer. After getting rid of so much, we have deteremined not to buy another thing unless it is edible....unless it is for fishing...or hunting...or camping...ok! Enough! We just thank the Lord for all of His blessings, evening getting rid of stuff! By the way, we did not store the kids. They came with us.
Posted by Davoll Family at 7:20 PM