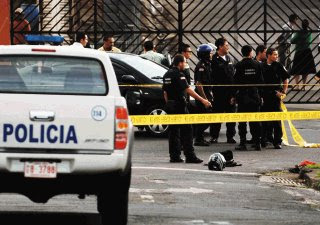 On a lighter note, I was privileged to go to a school in Poas this past Saturday. The school is a shelter for the displaced from the earthquake. I have included my Spanish version of our day. I had to write it for an assignment today. I thank you for being such an encouragement to us here in Costa Rica. I think I am writing all of this to be an outlet for my thoughts. Thank you for listening…or not :)
Posted by Davoll Family at 11:44 PM

Wow! Your story reminds me so much of our time in South Africa. Whenever we were hit by crime (daughter hijacked, Jim robbed at kinfepoint, my mugging, and on and on), our church people would wonder if we would want to go back to "safe" America. But we didn't!

I pray that the Lord will give you the courage to minister in dangerous surroundings as you reap a harvest for Him!