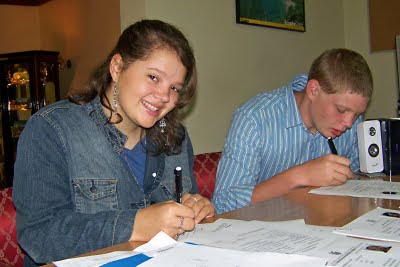 Visas Acquired!
The journey -- adventure--for our visas began in San Jose several months back. We had all of our paperwork sent to us that we needed (which is a process in and of itself) and we went to the Embassy/Consulate downtown San Jose. We were told our paperwork was incomplete. So, we made contact again with the wonderful missionary who was helping us with the legal paperwork from Quito. He assured us that our paperwork was complete, but he secured one more paper and sent that to us as well. We returned to the office to hear the same bad news. We went around this merry-go-round a few more times. Finally, with two days before our departure to the United States. The Consulate contacted another office and reviewed our paperwork and said that it was INDEED correct as presented, and we would be issued our visas the very next day. We rejoiced. We began the paperwork trail including going to the bank and paying for our visas.
We returned in the morning with our entire family. We all signed our visas and took lots of photos of this great moment. Then, Jeff was called into the Consulate office where he was questioned for a lengthy amount of time. The Consulate was challenging the validity of our paperwork yet again. We are a new organization going into Ecuador, and the Consulate was taking this very seriously. There was some serious resistance to our application.
Now, we are in Quito. We are required to register our visas. The San Jose Embassy had told us to expect more resistance. However, the power of prayer was behind us. Jeff went in Wednesday and presented our visas for registration. He said that they were very helpful and welcoming. They told him to return on Friday for approval. He returned on Friday when the office opened. The visas were ready and waiting for him. Praise the Lord. We found out later that one of our supporting churches had an ALL DAY prayer meeting for their missionaries that day. We know that our needs were taken to the Lord's throne that day. We praise the Lord for the faithfulness of His people to pray for us.
Ok-- so, you want to know a little bit of the excitement. As Jeff was walking through the streets of Quito to find the government offices on Wednesday. He walked right through a school protest. Apparently, they did not care for their teachers very much; so, they took it to the streets. The riot police were there with tear gas. It was quite the welcome for Jeff!
Posted by Davoll Family at 10:53 AM

Labels: We have our visas for Ecuador